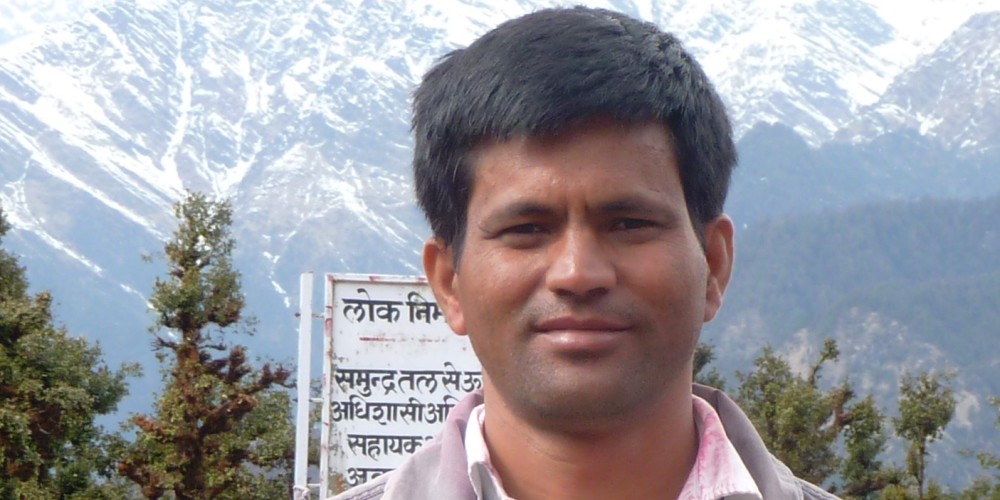 Mahipal Singh Danu is the Edge of India Cooperative’s Co-ordinator for Dhur and a member of the organising committee of the Bageshwar Ecotourism Co-operative Society. Mahipal lives, with three generations of his family, in the village of Dhur which is an extended community of 23 households in the Surag Dhur Valley.  Dhur translates as ‘on top’ and this is a vivid description of how you feel when you stay in his beautiful village.  Mahipal’s family offer their home as a homestay to Fresh Eyes travellers.

Mahipal is the Gram Pradhan, the elected village leader.  He has embraced this responsibility and has helped the community to get schools, piped drinking water to some housing clusters, improvements in its access road and improved mobile phone connections. He also worked with people in Dhur to develop the community based homestays for travellers.  These include his own house.   He has also successfully stopped illegal mining in the valley following a campaign with the district and state authorities. Mahipal wants to be able to help create job opportunities and better, more organic agricultural production in the villages of the region and help to stem the migration of young people to the big cities.

Mahipal has been committed to strengthening his community for over a decade. In 2005 he received national recognition, receiving an award on behalf of Dhur as it was recognised as a ‘Clean Village’. The award was presented by A.P.J Abdul Kalam the former President of India.